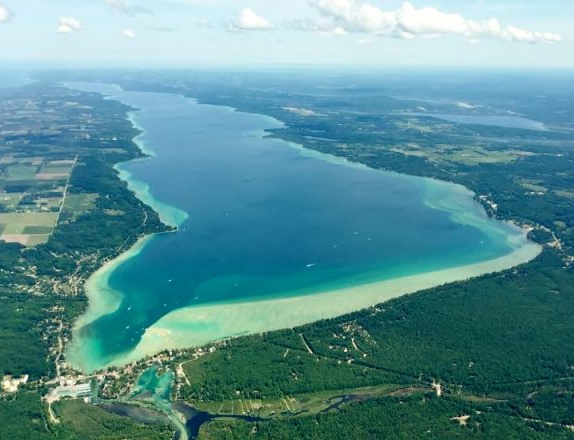 Sitting on the 45th Parallel, Torch Lake is a spectacular 18-mile long glacial lake whose waters imitate the intense blue hues of the Caribbean.  Locals talk about, “5-color days”, when the lake sparkles with five distinct shades of blue and they are right, it does!

Torch Lake is part of a chain of 13 lakes that flow through Michigan’s Antrim County and is considered to be the third most beautiful lake in the world according to National Geographic, following Lake Geneva in Switzerland and Lake Louise in Canada.

Torch Lake gets its name from the Ojibwa name Was-wa-gon-ong or Place of the Torches.  Local tribes once fished by torch light to attract fish to their nets.  For a time it was called, "Torch Light Lake", by European settlers but eventually it was shortened to its current name, Torch Lake.